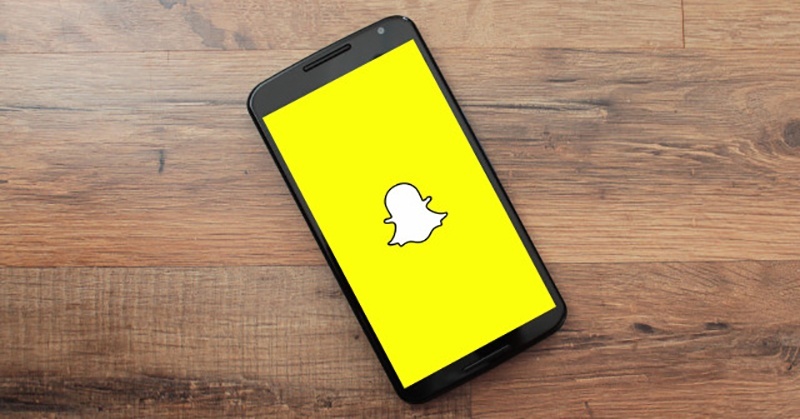 Savvy marketers embrace platforms that claim attention, not just hype. Snapchat has long been in the upper echelons of hype-generators, from its days as the naughty network for short-lived sexts to its infamous rejection of $3 billion dollars from Facebook. But ever since declining that buyout, Snapchat has matched its bad-boy buzz with savvy product tweaks, clever brand promotion, and innovative ad formats. Users and advertisers have followed in droves.

Still, myths abound about Snapchat, its user base, its best practices, and its utility for marketers. This is understandable. More than any other social app, Snapchat was built for digital natives; it takes time to master the platform’s nuances, and its leadership hasn’t shown themselves eager to sacrifice user experience for the sake of raking in money (though the winds of change have begun to blow).

We will not argue today that all brands belong on Snapchat. However! We do believe that all brands should at least consider it. To understand why, let’s rebuke some of the more resilient untruths about Snapchat.

Myth 1: Snapchat Users Are All Teenagers

Snapchat’s wild, sustained popularity among the under-18ers has been well documented. But teens are not alone in their zeal for creating and consuming Snaps. In fact, they’re losing ground. 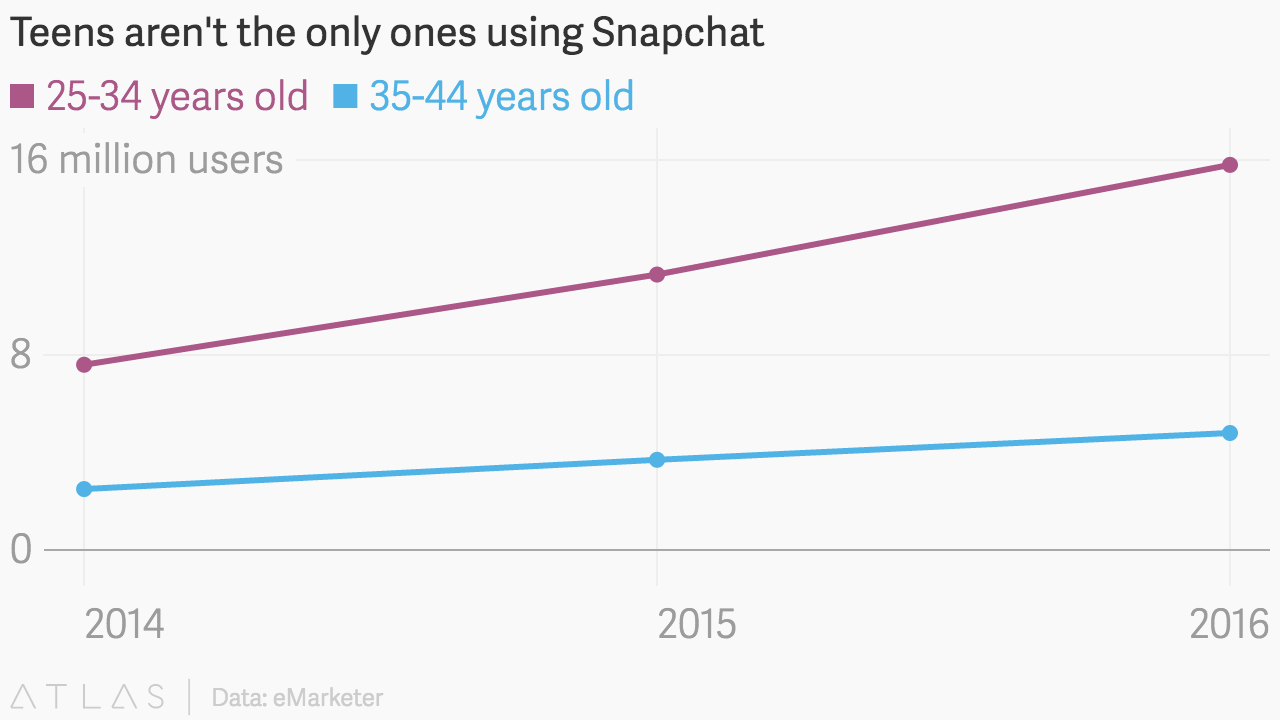 The number of Snapchat users aged 25 to 34 increased more than 100% in 2015. Perhaps even more meaningful, users over the age of 35 increased by 84%, and Snapchat recently released data highlighting that 12% of its nearly 50 million U.S. daily users are between 35 and 54 (source).

And where the users go, so goes the content targeted at them. We anticipate that Snapchat’s adoption by older generations will become self-perpetuating quickly, with an increase in content and ads tailored to their interests and wants, and then greater interest in the platform among friends of users, and on and on.

Myth 2: It’s Difficult To Build an Audience on Snapchat

The more popular any platform becomes, the more challenging the task of cutting through the noise in order to attract followers—especially if you want to get the right ones. That said, Snapchat has provided users (including brands) with two powerful ways to promote their accounts: the Snapchat QR code and the direct-link to follow.

If you’re unfamiliar with the Snapchat QR code, fret not. It’s very simple; from our perspective, making it easy to use is one of the smartest moves Snapchat has made.

If you were to open Snapchat and point your phone’s camera at the NBA QR code above, a pop-up would appear, asking you to confirm that you’d like to follow the NBA on Snapchat. (You can also screenshot a QR code from, say, Instagram, in order to follow an account.) You tap confirm, and bada-bing! The NBA has you as a follower.

Similarly seamless is the newer option to link potential followers directly to your profile. When tapped on a mobile device, your unique URL generates the same instant-follow pop-up as the QR code. You can find your URL within your profile dashboard on Snapchat, or just follow the convention: http://www.snapchat.com/add/YOURUSERNAME.

These two native tools provide great test-and-learn opportunities for how to grow your Snapchat audience. Try downloading your QR code graphic and posting the image on Facebook, Twitter, or Instagram, or even changing your social profile photos to the QR code. Try writing a short post explaining why people should follow you, and drop your profile URL at the end. Take it a step further by targeting your ideal audience with a small paid spend behind these follower-driving posts. We bet you’ll be pleasantly surprised with the results.

A second tried and true method of growing your Snapchat audience is a little more obvious: partner with influencers to cross-promote your account. We won’t go into that tactic here, except to say: it works.

There is certainly value, for many brands, in posting daily on Snapchat. However, the resources required to do so are substantial, and it’s not always the best use of time, given that the content “lives” for only a short while. However, we’re here to set the record straight: you can still reach the Snap-crazy teens or new-Snapping Moms on your radar, without having an always-on presence on the platform.

For advertisers, Snapchat offers several messaging options outside of the brand’s Snap inbox or main Story. The units you can buy range from dirt-cheap (really) to hugely expensive, and they’re all worth familiarizing yourself with.

Custom, On-Demand Geofilters: On-Demand Geofilters are the lowest-hanging fruit for marketers looking to spread messaging on Snapchat. They’re easy to design and launch, using the platform’s self-serve tool (see some examples just below), and the amount you pay for the ad depends on how long the filter is available and in what geographic area it shows up on users’ devices; with current prices, you get a ton of bang for your buck. For a great case study and a step-by-step guide, click here.

Live Story or Discover Video Ads: If you’re not ready to start Snapping every day but you do have money to spend, Snapchat offers real estate for video ads. Your video content needs to be designed specifically for the platform; Snapchat has eschewed the traditional wide-screen video format (like your TV) in favor of vertical video (like how people naturally hold their phones). And folks are going vertical: video consumption on Snapchat increasing 25% since the beginning of the year. These video ads are flexible and engaging, and you’ll pay per 1,000 views.

Sponsored Lenses: This ad format is the Big Kahuna of Snapchat marketing tools, both in terms of price and results. Brands can expect to pay 7 figures; they could also become the next Gatorade, whose sponsored lens during the Super Bowl drove more impressions than the game had viewers. According to Snapchat’s data, users spend an average of 20 seconds interacting with these ads, and the impact can become viral as Snapchatters send the branded videos and photos to their friends. A case of getting what you pay for—if you can pay a lot.

While new think-pieces emerge daily about which social app is growing the fastest, or is the current “it” destination for millennials, stats like the above speak to Snapchat’s increasingly powerful position in people’s lives. 41% is impressive penetration into one of the most valuable and (traditionally) hard-to-reach consumer demographics.

Snapchat isn’t winning the total audience battle yet. With 150-200 million daily active users, it’s just recently passed Twitter, is about half of Instagram’s size and pales in comparison to Facebook’s 1+ billion). But in the battle for attention, Snapchat certainly looks like a big dog.

More than a third of Snapchat’s 150 million daily users create “Stories,” broadcasting photos and videos from their lives that last 24 hours.

Video consumption on Snapchat rivals the amount watched on Facebook, which has 15 times as many users. Snapchatters are watching 10 billion videos a day on the application, up from 8 billion in February.

Users spend an average of 25 to 30 minutes on the app each day. Globally, this doesn’t surpass Facebook, but it’s a remarkable amount of attention on the platform every day. 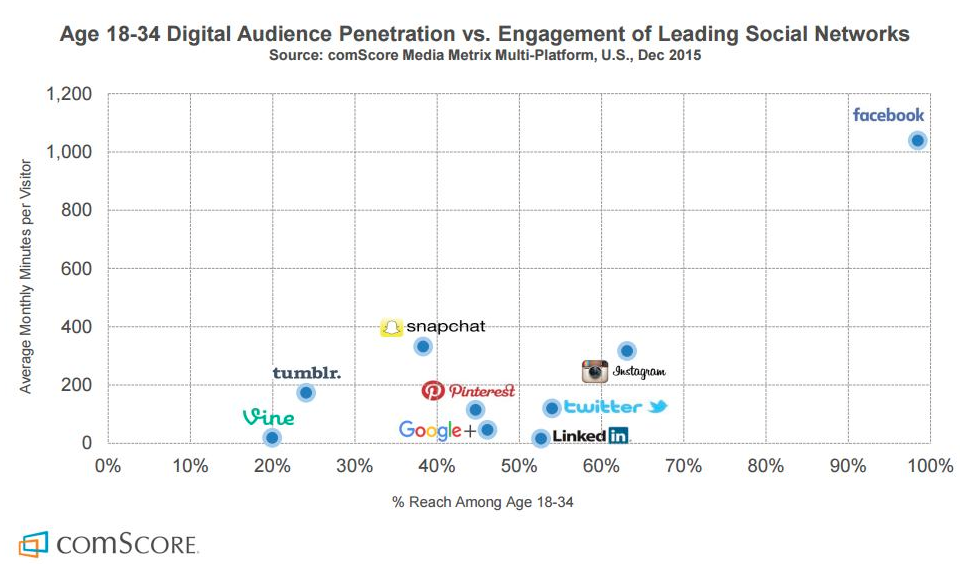 Snapchat is here to stay. Its audience and its capabilities as a marketing platform are growing on pace (or perhaps faster?) than Facebook and Instagram, its main competitors. To not consider using the platform in some fashion within your digital marketing mix would be a mistake.

AdWeek: How 4 Destinations Are Wooing Young Travelers on Snapchat